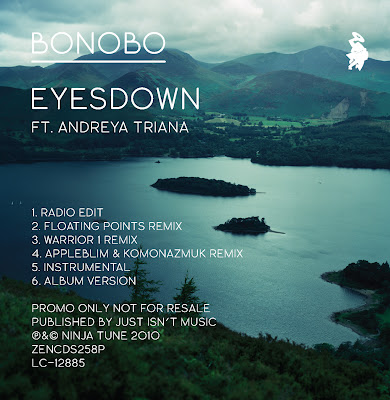 "Simon Green aka Bonobo returns with one of the key cuts from his forthcoming album, “Black Sands”. Drawing as much on the rhythms of two-step as the lush soundscapes for which he’s best known, “Eyesdown” also features a remarkable vocal from Andreya Triana and enough fuzzed-out sub-bass for a binful of dubsteppers. Classic and contemporary, melancholy and exhilarating all at once, “Eyesdown” sounds like the kind of record Massive Attack could be making if they were starting out now."

Well that's what the PR says, but listening to the track i've no idea how they came up with that Massive Attack reference. Still though, tis a good 'un, and well worth a few clicks of your mouse.

The drums are reminding me of Mujava's Towship Funk too, which is no bad thing.

Listen/Download/Pre-order here.
Posted by Tom at 18:29