Seems like every man and his blog has posted the Joy Orbison BSRkR 01 mix over the past 6 months, so I won't bother repeating it here. However there is one track from it that i just can't get out of my head. Here's a decription of the track by the ever lyrical 20jazzfunkgreats:

"The last C.O.M.B.i. edits 12 is killer, this mystery Japanese wizard gets the party going like the old skool was N.O.W. on one side, and get down well nocturnal on the flip, which is what we are bringing you: a metronomic disco funk beast that slides menacing across streets of a deep blue which resemble, for a moment, colossal coralline reefs across whose ancient underwater surfaces flicker hallucinatory shadows, the echoes of a dramatic score to make all Chromatics fans lose their shit do spread like blood spilling from wounds inflicted with frantic strings that stab the soul of a beautiful ghost of unbearable loneliness and mad longing."

If you live in The North and fancy seeing Joy Orbison spinning his impeccable tastes live, you couldn't do much better than seeing him headline The Faversham in Leeds on February 26th, alongside Coki, Floating Points and Brackles.

What a ridiculous line-up. Tickets here. See you there.
Posted by Tom at 13:21 3 comments:

Drowning in a sea of wav...

Or a sea of mp3, if you're less inclined towards a pun and more towards correctness.

Over two years ago I published what ranks among my most popular blog posts ever. (It had four comments, although one was spam).

It was an A to Z of tracks that I was into, and looking back at it now I think the list stands up as a pretty good and varied barometer of what was around at the time. Think of it as an extremely local Hype Machine if you will. It was partly topical (Bat for Lashes), but mostly it was an excuse for me to post up an eclectic bunch of tunes (which is what this blog was started for in the first place).

This week I was reading an article in The Guardian that mentioned something about how music in its digital form was losing out to solid formats because of its vast availability and the increasingly unlimited storage capacity of digital players/hard-drives. I have been feeling this myself over the last couple of years, having moved almost exclusively from purchasing CDs and vinyl to exclusively downloading mp3s.

So this post is actually only an excuse for me to sift through my laptop in an attempt to try and connect with some of the music that has been languishing there, unlistened, while searching for more, more, more on the neverending network of blogs, websites and online record shops over the last year or so.

I've got hold of more new music in the last year than at any other time in my life, and it was hard to pick only one artist for each letter (should it be Burial&Four Tet/Benga/Boxcutter/Bok Bok/Bat for Lashes etc) but who knows, there may be more A to Zs in the future.

If you have any suggestions/comments/praise/hate, stick a comment in below. And it goes without saying: if you like the artist, do something to support them like buying a gig ticket, mp3 or even better, a CD!
A is for Aardvarck - Untitled 2 (Bloom 3)

B is for Boy 8-bit - The Cricket Scores

E is for Emika - Drop the Other (Scuba's Vulpine mix)

G is for Gemmy - Rainbow Road

H is for Hudson Mohawke - ZooOOoom

I is for Ikonika - Smuck

M is for Mayer Hawthorne - A Strange Arrangement

N is for Nosaj Thing - IOIO

O is for Optimus Grime - Immortal

P is for Peter, Bjorn & John - It Don't Move Me (Weird Tapes remix)

R is for Rustie - Zig-Zag

S is for Skream - Dutch Flowerz

U is for Untold - Stop What You're Doing (James Blake remix)

W is for White Denim - I Start to Run

X is for The XX - Heart Skipped A Beat

Y is for Yeasayer - One (MMMatthias remix)

Z is for Zomby - Tarantula

The post artwork is taken from The Gashlycrumb Tinies, an illustrated poem by Edward Gorey. View it here.
Posted by Tom at 12:56 3 comments:

Labels: a to z 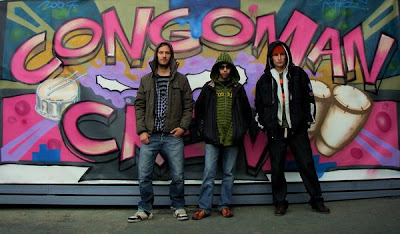 Seeing as my last post about Yeasayer got taken down for copyright infringement, i thought it might be nice to share some music that the artist themselves has already made freely available.

If you are a) into the Swedish reggae scene or b) been keeping up with the european snowboard films this year, you may well have heard of Congo Man Crew. If not, now's the time to get involved. Their Myspace and Facebook pages provide scant biographical information, but the music more than speaks for itself.

Deep roots reggae laden with tasty riddims and vocal hooks is what the crew is about, and you can download their latest EP Run Fast ft. Mysticman right here.
Download: Run Fast EP (Z-Share)

Their music features on Jolly Roger, the latest flick from the Pirates crew.

Check the trailer below.