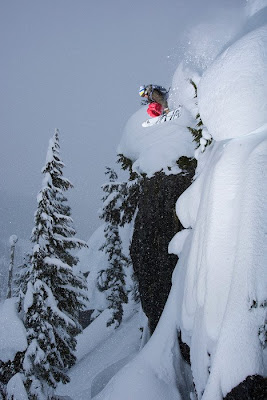 Those of us who keep half an ear to the soft, fluffy ground of the freeskiing world will doubtless need no introduction to TiredEyes aka H-Mob Productions, soundtrackers as they are of the hugely popular Nimbus Independent webisodes that began last winter season with the future classic 'Hunting Yeti' series, and continues this year with 'En Route', a travelogue of the world's best powder locations and feelgood moments, brought to us by the Nimbus crew that includes, among others, Eric Pollard, Pep Fujas, Chris Benchetler and Andy Mahre. Note to self: bone up on grammar and sentence structure.
However it seems that outside the skiing bubble TiredEyes is yet to make significant waves. With a forthcoming album (digital release only so far), things are hopefully set to change. With influences ranging all the way through soul, hip-hop, jazz and beyond, this music aint your typical jump-out-yer-seat stuff, in fact it can be slightly soporific if you're not paying attention. But once you start to peel back the layers, this fresh, innovative and emotive sound will soon become your powder cruising/summer barbecuing/(insert any relaxing moment here) music of choice.

A couple of tasty morsels to whet your appetite for the full release: Take Care of My Family, which is structured round a Cali P acapella; We're OK Watch TV; and To Say Goodbye.

No solid release date on the album yet but I know i'll be checking his myspace regularly for updates, and i hope you will too.

Nimbus recently dropped their second episode of 'En Route', and it looks like they enjoyed getting to grips with the lederhosen as much as the beer steins. Check it out, then go right back to the start and watch Hunting Yeti. Pow.
TiredEyespace
Nimbus Independent
Posted by Tom at 18:10 2 comments: