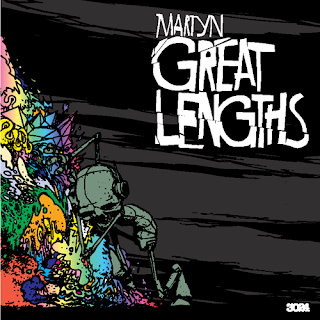 ...Or maybe it's exactly as we know it. Dubstep is one of the fastest growing musical genres in the world today, often breaking far away from its roots in UK garage, 2 step and grime. Producers like Vaccine, 2562, and most recently Martyn spring to mind as artists who are tackling the genre from different perspectives, whether geographically or musically.
Martyn doesn't like to pigeonhole his sound into a particular category, rather he prefers to dub it 'Martyn music' (fair play seeing as he's the one who's making it). It's a preference that becomes clear when listening to the new LP Great Lengths, as each track reveals something more about the Martyn sound, whether it's Boards of Canada style vocal samples, stabbing rave synths or lolloping melodies that ground the track while giving other sounds room to manoeuver around the bassline.

So, a dubstep album that isn't strictly dubstep, but neither is it techno, ambient, house, garage, or any of the other genres you may care to fling at it. It is however interesting, challenging and fresh. Let's hope producers of a lesser caliber than Martyn's don't try to emulate his sound, as i doubt the result would be any more listenable than this fine effort.
The album Great Lengths has been out for a week. Go buy it.