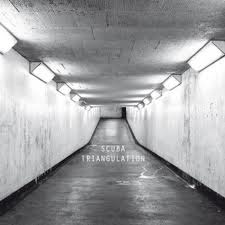 Triangulation (definition): The location of an unknown point.

What initially strikes me upon listening to Scuba’s sophomore effort however is that the Hot Flush Records boss knows exactly where he’s at. Despite running his own label (home to recent critical faves Mount Kimbie), holding a residency at Berlin’s legendary Berghain and releasing music under two different monikers (SCB is his more techno orientated sound), Paul Rose has managed to produce an album that stands out as one of the best of the year.

While Rose may move between the boundaries of electronic music, there is still a unifying theme to his productions. Pressure, depth and melody are often present, and whether the track in particular leans towards dubstep, techno, or (more recently) drum n bass, it’s always very ‘Scuba-ish’. These three genres do provide the backbone to the album, but they’re blended so well that it would be unfair to categorise it as anything other than ‘post-dubstep’ and leave it at that.

After opener Descent informs us that we’re in for some deep listening, second track Latch explodes into action after a relaxed start with a half-step drum pattern and mounting synth line. Minerals employs the sound of dripping water as a percussion tool, while You Got Me takes the heaviest stab at drum n bass of any track on the album.

Album highlight Before comes thumping out of the speakers with a beat that would snap your neck if it weren’t so, well, ambient. A chopped-up vocal sample provides the hook, and the synths provide an aural signpost that is completely recognisable after only one listen. So You Think You’re Special provides an uplifting counterpoint to the darker tracks on the record, containing as it does the lines ‘Here you’ll find the one/Here in the sun’.

All told, Triangulation is a beguiling, cohesive album that more than justifies being listened to as a whole, and only on repeat listens does it reveal hitherto unseen intricacies and depths that are simply hinted at with a cursory glance. A must for any discerning fan of music, electronic or otherwise.

Buy it at Boomkat

Great blog, really enjoyed reading it. Have bookmarked you and will check back regular. Please feel free to take a look at my blog...Planning Permission for Conservatories

music is great, it is! http://www.duffeysheating.com

After the Newports Cigarettes Website arrives at Europe, then has been one kind of luxury goods, only in aristocrat popular, the people consistent cognition will be regarding this - - smokes the cigar as if to make the person sex appeal, will be rich in the masculine charm. Recently, in the world most expensive cigar brand COHIBA Behike had the new movement, they through limited the quantity the version lip gloss cigar's form to promote the Cuban tradition cigar, this command Cheap Newport Cigarettes connoisseurs were very happy.

These special cigars are select from the superior Cuban Marlboro Lights. It is well known, the tobacco resources' richness and the importance already let the cigar become the Cuban this small country symbol. The Behike cigar uses the Cuban West province (PINAR DEL RI) VUETA BAJO the local top grade leaf tobacco, passes through five year about the fermentation, selects again. Five kind of leaf tobacco's lusters, the quality of material, the fragrance can satisfy these to have the harsh request to the flavor to taste Newport Cigarettes.

Siberian huskies for adoption near me said...

But the most important thing I am not giving up and holding it until I find success. I am really positive using your thoughts and knowledge will help me to improve myself. siberian husky puppies for rehoming      Great work. Keep doing this great work for us. Loved it.